Charvet- The most luxurious shirts (and ties) in the world 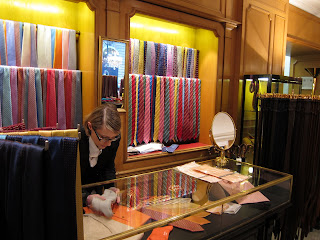 For men, finding the right dress shirt (and keeping it in good shape) can be quite a hassle.  The best fitting shirts of course are those that are custom shirts- either made to measure (MTM) or bespoke.  Many people use them interchangibly, but there is a slight difference as explained by the article here.  However, for our purposes, a custom shirt is is a custom shirt tailored to your body regardless if its bespoke or MTM, as long as its different from ready-to-wear (RTW) shirts, or the shirts that you normally buy at department stores.

So which company is the best?  There are many at the top, and Turnbull & Asser is one of them.  With a Royal Warrant, T&A makes shirts for the British Royal Family, including Prince Charles and Prince William.  I had a couple made when I was in New York, and the quality is just phenomenal.   They say the ultimate rig-out is a Huntsman suit, a T&A shirt, and a Hermes tie.  T&A has its own proprietary material, and the quality of the shirts are amazing- so much that 3-4 years later they are as good as new, while "newer" shirts bought from top brands have needed to be thrown out.

However, I believe the title of the King of Shirtmakers belongs to Charvet, a French shirtmaker located in the heart of Paris.  I had heard so many good things about them, he decided to investigate while in Europe.  Already very pleased with his T&A shirts (the durability is probably the best in the world), he wanted to see if anything could top that.  Unlike Turnbull & Asser, which has stores in major cities (New York, Beverly Hills, London, etc), Charvet only has one store*, a gigantic 8 floor multistore at the The Place Vendôme in Paris. 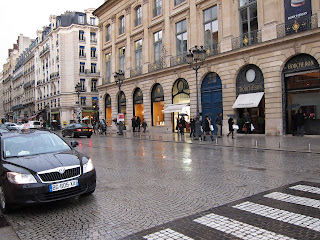 Here is where the magical experience begins.  When you step in, you are flooded with colors of the rainbow- they are just so many shirts and ties and other accessories, and the place just has a wonderful feeling about it.  There are enough ties to fill a rainbow, and the designs and the quality of Charvet's ties are just amazing- more beautiful than any I've ever seen.  This includes Zegna, Hermes, Brioni, and Kiton.  Obviously not all ties are better than those brands, but a good amount definitely are.


Beautiful ties in the store: 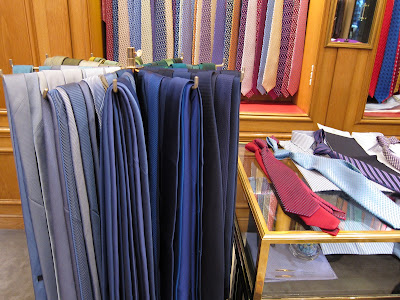 Picture of the Ground Floor (picture with the car above is outside the store, and the first picture of this post is Charvet as well): 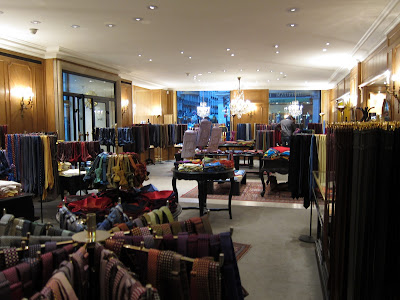 I then proceeded to the elevator to go upstairs.  The sales lady came along and asked which floor we wanted to go to.  Well shirts probably.  No problem, a stop to the RTW section first (I wanted to see them before considering bespoke or MTM) to look at the styles and selections.  First the staff had me try on sample shirts to determine my size.  "Hm.. you should go for the 38 and not the 36 because the shirt will shrink a bit.  A slimmer line would be good for you."  She then proceeded to select the RTW shirts in each category.  Charvet is known for its stripes (just like T&A is known for its 3 button barrel cuff), and there were some amazing stripes indeed.  I then narrowed down the selection to a handful of shirts.  The staff member then brought us downstairs to look at the different shirt combination with the ties downstairs.  Service was impeccable, and nothing was rushed- it felt like you were the only one in the store (actually that was true on that Saturday afternoon!). 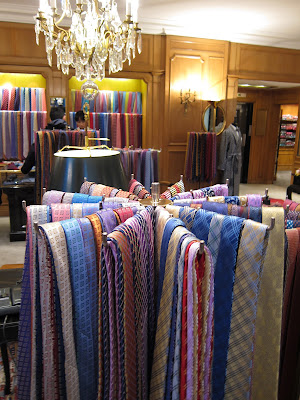 With so many ties to choose from, it became quite hard to find the right tie, though the staff assured us there were many ties that would help enhance the shirts.  I took my time and selected several amazing ties.  The staff then put in on the shirts to show the amazing different combinations.  The result?  Amazing.  I was tempted to expand the picture below even larger to fill up the whole screen because these ties are so beautiful.  You can click on them to see the larger photos. 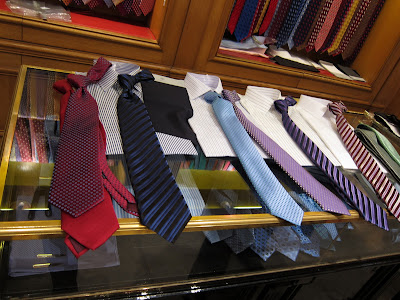 In the end I selected two shirts (and white and a striped shirt with blue and purple smaller stripes) and two ties.  As the King of shirtmakers, even the RTW shirts will probably cost more than any shirt you've probably ever bought.  Ties are around the same price as the top fashion houses that have create fabulous ties (like Hermes and Zegna).  But once you see those shirts (and ties especially) you'll see why- there simply isn't anything like it in the world.  I have used a flash so you can get a glimpse of how shiny the ties were in the store.


I was too busy trying on shirts to take pictures of anything but the ground floor (which is mainly ties).  Either it was the 2nd 3rd, or 4th floor, but that was a whole floor dedicated to RTW clothes.  Other floors have the bespoke section where you can select literally 200 shades of white and blue, and custom the shirt to your heart's desire.  I decided against it because he would have to get refitted in 5 weeks time.  Charvet will build a sample and then refit it in case you want to make any changes.

The good news on the picture front is that his friend found the store so beautiful she took his camera to start taking random pictures of the store.  So at least there are a lot of great photos to share!

While I've focused on Charvet for Men's, it does make shirts for women as Sofia Coppola is a fan, and it even has shirts for children (though I believe this is highly unnecessary, but then again if there's someone who will buy it... 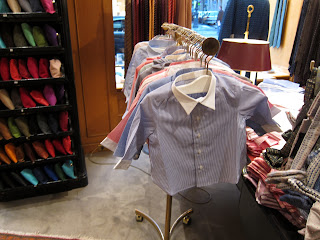 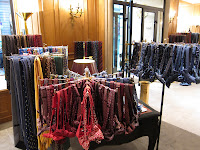 More ties and bowties.  The selection really was phenomenal.  Practically every different type of color, in any design imaginable.
Charvet also sells cufflinks, though if you buy a shirt you get to choose a set from their huge selection (the ball ones, not the metal ones).  I asked them for extra buttons and collar stays and they gladly gave me a beautiful small felt cases wrapped in another paper bag to actually hold them.  Just part of the Charvet experience.  Then again does a small bag really matter when you're buying a shirt for over 200 EUR?

A rainbow of hankerchiefs below.  You really can get lost for hours in this store looking at everything... 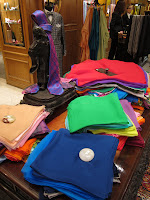 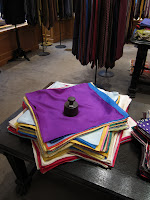 So that's the beauty of the Charvet store.  As mentioned before, I was too fascinated picking out shirts to actually bother to take a lot photos of the store itself other than the main entrance.  It would also be unfair to compare RTW shirts from Charvet against the custom shirts from other shirtmakers, so we won't make a side by side comparison here.  I'll update this post in the future when there has been a chance to test the durability of Charvet shirts.  But one things for sure- you can't go wrong getting a Charvet shirt or tie for that matter.  The beauty, elegance, and the experience of buying a Charvet shirt is simply just one of a kind.

If you're ever in Paris, you need to stop by this place- even if its only to take a look!

* "Is there a Charvet shop in London?" someone asked - I occasionally do check how people get to my site-well yes and no.  Charvet only has one official store, but you can get a small selection of shirts and ties elsewhere- Bergdorf, Saks, NM in the USA, and most recently, at Selfridges in London.  However the prices are much more expensive and the selection is limited.  When on sale, Selfridges is worth a look, but really if you're in London you should go to Paris just to check out the store.  As the pound is quite strong, buying a couple shirts and ties in Euros at the Charvet store will make up for the Eurostar!