Guide to Commemoration Balls at Oxford

One of the magical things at Oxford is the White Tie Balls, also known as the Commemoration Balls.  It's basically the epitome of all balls and the one of the closest things to a Harry Potter experience, (the other being dining at Christ Church).

The year I went to Oxford, there were five "white-tie" balls.  (One during the first term and four during the summer)  Technically if you don't mind standing out you can overdress and wear white tie to any party, but these are the ones where its actually expected.  (You can of course, wear black-tie or something less formal where it says "white-tie preferred").

I'll cover the Merton Ball (the first term ball during the end of November) in another post, as I'd like to focus on the four Commemoration Balls.  Technically there is only one Commemoration Ball every year (Magdalen, New, and Worcester), but this year there were four!  Christ Church was on the Saturday at the end of Trinity's Week 8 term, while Worcester, Trinity, and St John's were all on the same Friday at the end of Trinity's Week 9.  Why three balls are on the same day I'm not sure, but all the balls definitely had enough demand.


Obviously you can only attend one ball on Week 9, unless you are 1) Crazy and rich enough to buy tickets for all the balls, and don't mind leaving one party early for the next, or 2) Gate crash one or all balls.  Because of the price of these balls and the limited supply, gate crashing balls have been quite common.  As a result, the larger colleges have become more sophisticated in thwarting gate crashers.

So which one should you go to?  Here's how I would decide:

A) You'll get to buy the tickets before anyone else
B) You get access to the dining tickets if you want that (you might still need to be put in a ballot)
C) The price might be cheaper for your own college.
D) You should support your own college (well should... I actually think Mertonians could have skipped their Winter Ball)

2. Go where all your friends are going.
You'll have a lot more fun when you see all your buddies there.  After all, you're there to have a good time.  But what if you have different friends going to different balls, or just want to go to the best?  Which one should you go to?

Here's my ranking of this year's Oxford Commemoration Balls.

The most sought after tickets that year were definitely the tickets to Christ Church.  At £155 for a non-dining ticket, it was priced lower than most of the other balls, and dare I say it, much much better.  I went to Trinity, which was an amazing ball, but Christ Church just blew it away, possibly 10 times better than Trinity.  I'm exaggerating obviously, but with more space (grounds are larger), and more food and bigger events (the bumper car racing track was double the size!), it's fair to say that on all fronts (grounds, rides, food, security, maintenance and entertainment) Christ Church was the best I've seen.

3. Price.
If you're already forking out over £130 pounds (not to mention buying a dress or renting out a white tie) to go to one of the events, the slight differences in price really shouldn't matter.  If you are worried about cost, there are various other black-tie balls throughout the year.  Not as grand, but far more affordable at around £80 pounds.  GTC, St. Peter's, St. Catherine's, and other colleges all have black-tie. 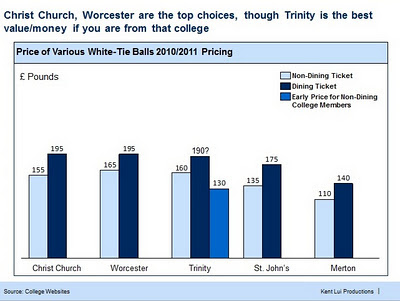 Here's what I found on the pricing of the balls.  Generally they are all in the mid 100's, with dining tickets (you start two hours earlier with dinner) £30-40 pounds more.  My advice?  Skip the dining tickets, unless you're celebrating with a significant other, or all your buddies are going and you've got cash to spend.  You probably won't get it anyway if you're not a member, but more importantly there is tons of food at the ball for non-dining guests, you can always eat first, the halls are not that comfortable to sit in (unlike Merton's dining ticket which I do recommend), and the queue outside won't be bad because it will be relatively warm in June/July.  I heard Trinity had the best food, but even then if you're not with a significant other I would skip it.

So there you have it.  Anyone of these Commemoration Balls are magical, but if you're lucky enough to have a choice, and can only go to one (which I do recommend saving up for at least one if you are at Oxford), go to Christ Church.  It is the most value for money, though the downside is that you can't get tickets!

Getting Tickets:
The only problem with that is that you'll need to know someone who goes to Christ Church since the college has a lot of members and due to the reasonable price it creates an absurd demand, where each member can only get 2 tickets, and then have to ballot for only 2 more.  Oh right and this happens Michaelmas term, so you need to get your Christ Church friend (who still has a quota) to sign up for tickets 6 months before the ball itself.


For all the other balls, you can book it online when it opens up to the general Oxford University, though its always easier to get a member of that college when possible because you'll be ensured of a ticket so you don't need to sign up and then not go.  Some of them do have cancellation policies (you sign up and can pay two weeks later or forfeit), while others do not.

Worcester had a fantastic ball, as its grounds are very big so you can definitely have more events than Trinity or St. John's.  The consensus from people who went there (and who heard from some gate crashers-unconfirmed) was that Worcester was the best of the night, followed closely by Trinity, and then St. John's.  At Trinity, there was excellent food (even for non diners), with ice cream, oysters, Chinese food in addition the the other food, desserts, and lots of drinks available,.  Good rides and games, though you did have to queue for quite a bit (some were 45 min toward the middle of the night).  There was great music too, within the tent that projected and well into the night.  The only thing annoying was that big balloon that we could see that was part of St. John's...

Because St. John's is just next to Trinity, many people could see a big balloon over the St. John's grounds and were a bit jealous.  Little did we know that the people at St. John's Ball had to queue for close to an hour in order to get on the balloon, and then of course, only got to go up a few metres.  So while it looked good, apparently it was quite disappointing.  In addition, to add insult in injury, there was no good music, except for one corner of St. John's.  According to some of my classmates there, people went to investigate why good music was only coming from one corner of St. John's and not in the middle.  It turns out the music was coming from Trinity, which is why it was in the far corner!

So based on this informal analysis from attending two balls and getting feedback on the others, here is how I would rank them again, with arrows to show how much I prefer one over the other.  I put Christ Church a lot above the others because it not only had oysters, G&D ice cream like others but smoked salmon, and overall much more selection of food, and the bumper car rides were double the size of other balls, plus it had a Merry-go-round and a Ferris Wheel, and... splendid fireworks.  Other balls in the summer had comparable displays, but just didn't have the scale as CC.  In some other balls trash would start piling up around the trash cans as the grounds reached their limit, and felt a bit cramped.  Christ Church with its phenomenal sized grounds = more space and more rides meant that queue time for the rides were decent (less than 5-10 min at any ride) and the overall security and atmosphere (CC literally had people cleaning up and pick up the trash with robotic arms throughout the night) meant that Christ Church wins hands down based on price/experience.


For next year, my bet is that Magdalen >>> Oriel, though it might not be as clear as Magdalen is reportedly close to £200 for a non-dining ticket.  For the year after (2013), there's only one big White-Tie, so go to New College.  And then of course it will repeat all over again, so my guide should be useful again in three years time when the four summer balls come back again!


Conclusion:
In the end, it doesn't really matter which one you go to.  Those lucky enough to be going to Oxford or being invited to one of these events in itself will have a memorable, magical night, better than any other event most people will experience. To put this into perspective: Many of my classmates were disappointed at St. John's, but a classmate who had brought friends from Canada said she was spoiled in staying for Oxford too long because they thought the St. John's Ball was absolutely splendid.  There's definitely some truth to that, as Oxford is indeed a magical place.