When Soap Gets too Sweet

For years, Bath and Body Works has created some of the best smelling soap.  Mostly sold in the America, its soap/shower gel/sanitizer has some crazy followings that people from all over the world have made a stop to stock up on the soaps when they come to America.

It has now come to Asia in select places (albeit at a jacked up price).  One of my minions spotted it in the Marina Bay Sands in Singapore at the gift shop, at $30 SGD for a shower gel that normally costs $10.50 USD.

However, some of its products are just too sweet to actually use.  I discovered this when I brought back a good stash of hand sanitizer to Hong Kong.  I had been using it for years without much problem, and really enjoyed the smell.  However I discovered some problems when ants started showing up on my desk. 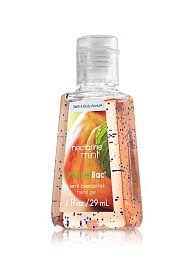 Under some papers there would be ants.  Not very many, but seemingly in a straight line, like they had somewhere to go.  I immediately cut off the food supply, not that I was actively eating in my room.  Gone were little snacks (fully wrapped and not opened), and other sort of things.  The table was wiped with soap in case of any trace of crumbs.  Yet weeks later the ants still appeared.  What could be so appealing?

It was only until I decided to clean off the whole desk that he discovered the problem.  The ants were still active as he moved from one section to the next.  Then I found the culprit- hand sanitizer.  As I moved it from one area, he saw ants approach it, then leave... normally ants are not fans of alcohol, but let's take a look at the product description from the website:


Spread love, not germs. This pocket-sized bottle contains natural ingredients and powerful germ killers that, wherever you go, get hands clean and lightly scented with the mouthwatering fragrance of juicy nectarine, grapefruit, sugar, and crisp mint leaves.


Nectarine, sugar, and grapefruit?!?!?  No wonder the ants were all over this stuff.  The smell of the open bottle was so alluring and convincing that the ants came to scout.  However, once they arrived to the bottle, they would realize that they were deceived, but not before they polluted my my desk with their annoying presence.

Once discovered to be the problem, I then promptly took the hand sanitizer and threw it away, and the ants have since dissapeared.  In short, hand sanitizer is good, some fruit smell maybe good, but when it smells too much like honey and fruits, then you have a problem.  Or perhaps it is a success for Bath and Body Works, given that even ants were fooled by its soap?
Posted by Kent at 2:47 pm