Hello there! With the raining season of April apparently not over in May, I've decided to talk a trusty companion that I have had last year and have been wearing for this season to battle the spring elements.  I got this last year after reading a GQ article on it.  In the midst of the "great recession" spending wisely was very important.  I debated an hour or so in the Barbour store in New York with a friend before ultimately deciding to get it.  It ended up being one of the best purchases I've ever made.  I'll give some examples of why a bit later:

Barbour Flyweight Wax Sapper (shown in olive, and the one I recommend- actual jacket pictures below) 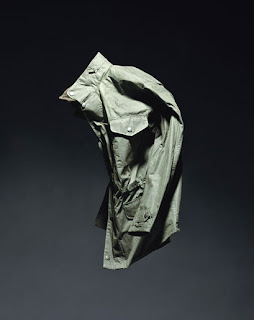 You can read the fancy GQ profile on it, of how the jacket was designed for the trenches during WWII and the engineers wearing it who dug the tunnels were called "saps", and how there is a hidden hood or corduroy neck and cuffs that absorb the rain.  However I'll give you two real world examples in the modern day of how good this jacket is:

Had just finished showering (hair still wet and all), and I decided to go outside to get something from the grocery store.  I grabbed the Barbour jacket and headed downstairs.  I was downstairs in my apartment lobby when I saw that it was raining heavily outside.  Instead of going back to get an umbrella I figured I would just zip up my jacket and go- hey good time to test how waterproof it is right?   It was late at night and pitch black, but I could see from the headlights of the cars that were driving by on the busy streets in New York. 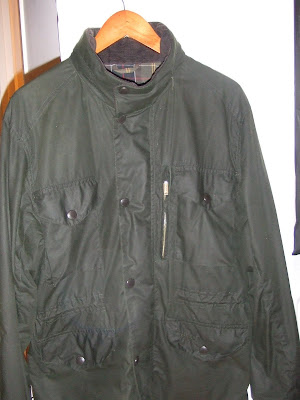 I could see the pouring rain as the headlights illuminated the street, yet I didn't feel a thing!  Not a thing.  I knew it was raining on me, but it was quite surreal as I could see but not feel anything.

Water did not seep in through the sides so I I wasn't wet at all, and I guess my hair was wet and nothing was getting into my face as the rain came at a slight angle, so I just didn't notice.

What really came as a shock was that a minute later I see my roommate coming back with a huge umbrella over him.  You know, those super large ones they use for golfing.   I ask him "Why do you have an umbrella?"  He looks at me blankly and says "Uh, its pouring rain."  Oh right, it is raining, I just don't feel a thing.

The second time I saw my jacket in action when I was having brunch outside at a Mexican restaurant.  I was wearing my jacket, and I was rearranging some dishes I accidently spilled salsa on the forearm part of my jacket.  I gasped as I had bought this coat only a week ago!  I quickly rushed to get paper towels to wipe in off.  Then I noticed something amazing.  The salsa just came off as I wiped it.  With a couple of wipes it was like the salsa was never there.   I was so amazed that I had to try it again-same result.  If salsa just rolls off it, rain doesn't stand a chance.  In fact, when someone says their coat is waterproof I often take my jacket out and have them pour salsa on it (it takes quite a bit of convincing) to show them how waterproof the jacket really is.  Then I offer to pour salsa on their "waterproof" jacket and of course they decline lacking the same confidence in their own jacket! 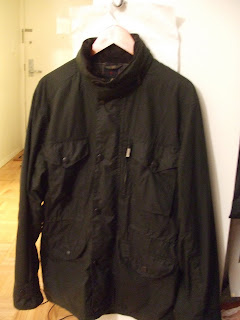 It's no wonder that Barbour is worn by the British Royal Family- it is the only apparel firm to have three royal warrants (Burberry only has two).  The thing is amazing for hunting/digging trenches in the rain or of course regular people like me who will be traveling to and from work on a rainy day.  The jacket is obviously perfect for the outdoors but looks great over a suit as well (it covers my entire suit jacket).  I like it better than a trench coat, as it is much lighter and more flexible and repels water as opposed to most trench coats that merely absorb the water (though you could get a wax cotton trench).

It was a bit pricey yes, but it has paid for it self several times over.  Cleaning is easy- you just stick it in cold water and hang it to dry.  (Do NOT dry clean, use soap, or a washing machine-that will actually ruin the jacket).  When the wax starts to wear out- you can either buy a can of Barbour Thornproof Dressing for $12 and re-wax it yourself (not recommended for city dwellers with no space) or just send it to the nearest Barbour store to get it done for a nominal fee (I paid around $30 for mine).  That's all the maintenence you need to last for generations!

Pros:
Great value to last for a lifetime
Waterproof to a whole new level
Lightweight and flexible for any occasion

Some say the wax might get on other things (bag, seats), but I 've never had this problem.  I think the wax is an acquired smell- I don't even notice it anymore.

It is expensive at $400 USD, but worth every penny.  If you're in America instead of buying in an American store near you can buy it online from a UK website (One is www.outdoorandcountry.co.uk).  Even with shipping, the exchange rate now will allow you to save around $100.  That's already 25% off.


GQ article here:
Link to GQ website detail Barbour and other "Built to last" items
Posted by Kent at 3:02 pm